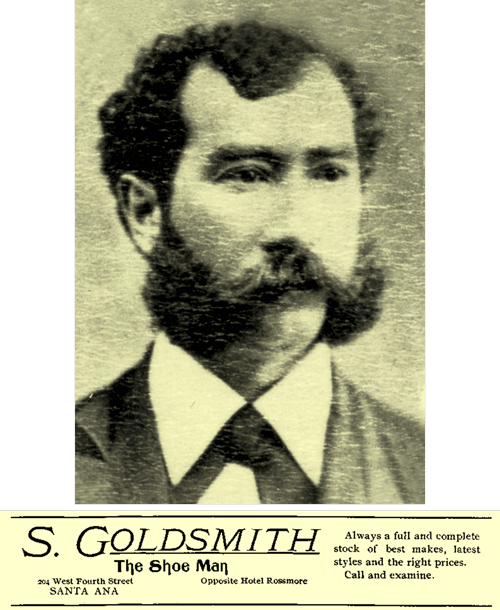 It was not unusual for Jewish merchants to be victims of violence in the early West. But it was unusual for violence to break out between Jews, who had the reputation of being law-abiding and peaceful citizens. Our story involves Simon Goldsmith, a prominent Santa Ana businessman, and his business partner George Kallman. Simon and his brothers Adolph and Leopold co-owned a general store in the tiny settlement of Rincon (near modern-day Chino) with George, all of whom were Jewish immigrants from Prussia.  In the pre-dawn hours of May 20, 1875, Simon, preparing to travel to Los Angeles for his brother Adolph’s wedding, had packed a large sum of money with which to pay bills. Kallman objected to the amount and the argument became so heated that Kallman hit Goldsmith with a bridle, and Goldsmith, in response, drew his pistol and shot Kallman, who died instantly. Goldsmith immediately turned himself in and was released on bail several weeks later. In September of that same year he was found not guilty by reason of self defense. Whether this decision was fair or not, it’s interesting to note that years later not one of Kallman’s and Goldsmith’s descendents knew about the crime; the only reason we’re aware of it today is because of local newspaper accounts of the time. The Jewish community had literally engaged in a “conspiracy of silence” in order to cover up something that didn’t reflect the best version of themselves.