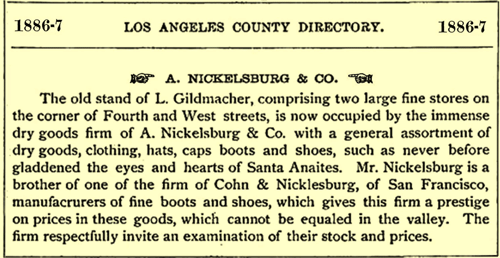 The Nickelsburg family of Worms, Germany consisted of four brothers and two sisters, all of whom emigrated to California in the late 1860s. Three of the brothers, Adolf, Siegfried, and Moritz, ran two successful general merchandise stores in Northern California for over a decade. In 1883 Siegfried married Palmyre (a French name meaning “palm tree”) Cahn, and shortly after started an extremely successful shoe company with Palmyre’s older brother Mayer. Adolf, meanwhile, headed down south to Santa Ana, where he and friend David Heller took over the business of fellow Jewish merchant Levi Gildmacher. Their store first shows up in the 1886-1887 Los Angeles County Directory, where customers are assured that “ the immense dry goods firm of A. Nickelsburg & Co.” will gladden “the eyes and hearts of Santa Anaites.”  However, by 1889 Gildmacher had returned, and so Adolf went back to San Francisco, where he and his siblings became one of the leading Jewish families of the city and were listed in San Francisco’s “Blue Book.” Adolf passed in 1897 at the young age of 48 and was buried in the Home of Peace cemetery.

Photo 2 Caption: Adolf Nickelsburg’s signature, from his 1872 Declaration of Intention (to become a U.S. citizen)