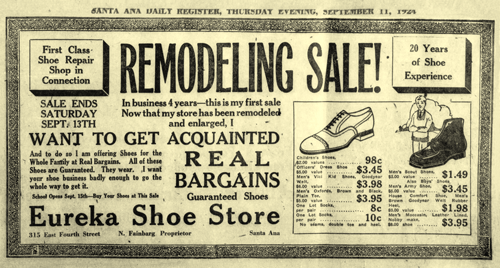 After Nathan Fainbarg’s father passed away, he and his mother Libby emigrated from what is now Belarus to New York in 1907. A few years later Nathan moved in with cousins in Michigan and started working as a shoemaker, and in 1912 he met and married Rose Gorodetsky of Detroit. The young family, now including sons Sam (later John) and Abe (later Allan) moved to Southern California in 1920, where Nathan attempted to find an existing business to purchase. A friend from Los Angeles drove him and Rose around until they discovered the Eureka Shoe Store for sale in Santa Ana; the shop had been in business since 1900 and was located on 4th Street, the center of Jewish life in Orange County at the time. The family settled in, and daughter Florence was born in 1926. The Fainbargs would drive to Boyle Heights to celebrate the Jewish holidays, and in a 2001 interview, Allanz”l remembered “ …we’d have to go through many, many streets and wiggle our way through Santa Fe Springs” to get there. As leaders of the Jewish community, Nathan and Rose helped found Temple Beth Sholom, Orange County’s first synagogue, in 1943, which is still thriving today.