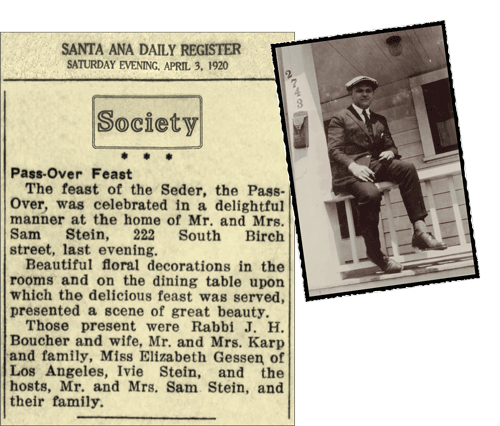 It’s easy to see the acceptance of the Orange County Jewish community in the 1920s by observing their appearance in articles, editorials and society columns in the Santa Ana Daily Register, the main OC newspaper of the day. Being mentioned in the society column was particularly important, because it was commonplace in Los Angeles and other major cities to deliberately NOT mention Jewish events and celebrations. In addition, this was a time nationwide that anti-Semitism was on the rise, though, clearly, not yet in Orange County. Here we read the description of the Seder that was held at Sam and Celia Stein’s home, who, along with Sam’s younger brother Ivie and the Karps, were leaders in the Jewish community. Rabbi Jacob Boucher, also mentioned, had just moved to Santa Ana to lead Congregation B’nai Brith, a fledgling synagogue with just 26 families. Though short-lived, this was the first real attempt in Orange County to establish a Jewish synagogue and Hebrew School. It would be another 20 years before Temple Beth Sholom made it a success.