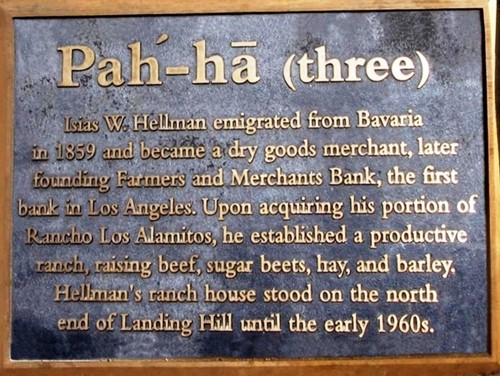 Isaias Wolf Hellman (1842-1920), a leading West Coast Jewish pioneer, is best known as a banker and philanthropist with strong ties to Los Angeles and San Francisco. Less well-known is the fact that he owned a working ranch in Seal Beach for over 30 years. In 1881, cousins John and Jotham Bixby, along with Hellman, purchased the 26,000-acre Rancho Los Alamitos (now home to Long Beach and Seal Beach). When John died in 1888 and the property was divided among the partners, Hellman received the southern third that is now in Orange County. He built a small ranch house on the land, and he and his family would vacation there during the summer. Known as Hellman Ranch, it was used primarily for cattle ranching and farming. Today a small remnant of the land, known as the Hellman Ranch Wetlands, is preserved in Seal Beach. Located near Gum Grove Park, it contains the Hellman Ranch Trail, a small family-friendly path with stone markers teaching about the history of the area and its indigenous inhabitants.