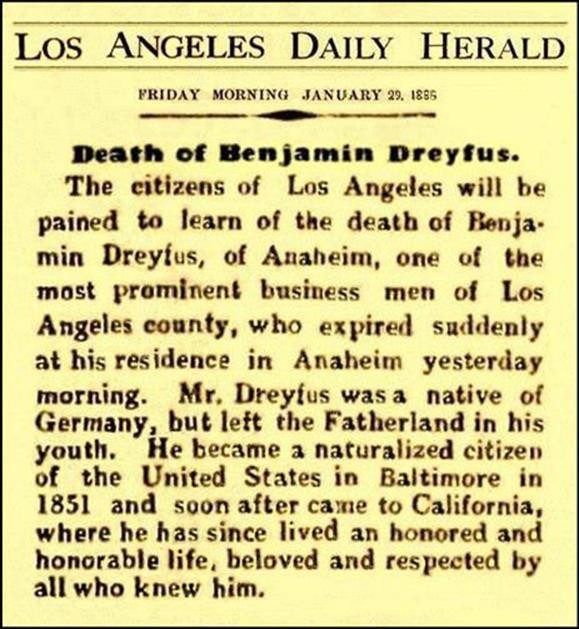 January 28, 2013 will mark the 126th anniversary of the death of Benjamin Dreyfus, the first Jewish citizen of what would later become Orange County. As can be seen from the front page of the next day’s Los Angeles Daily Herald, his unexpected passing was a shock to the community. According to the newspaper, “When the settlement of Anaheim was established in 1857, he built the first house in that place and became one of [her] foremost … citizens. The people of California with saddened hearts will ever cherich the name of the honest, generous, true-hearted Benjamin Dreyfus.” On January 30, 1886, he was eulogized on the front page of the Los Angeles Times:  “Ben Dreyfus is dead. Known well throughout the state, there are few places where his death will not be mourned by someone whom he has befriended.” He was buried at the Anaheim Cemetery and later re-interred in Home of Peace Cemetery, of Congregation Emanu-El of San Francisco, on April 25, 1889, together with his son Samuel, who had died in infancy. Benjamin’s widow, Leah, who died July 26, 1912, was interred in the same plot.