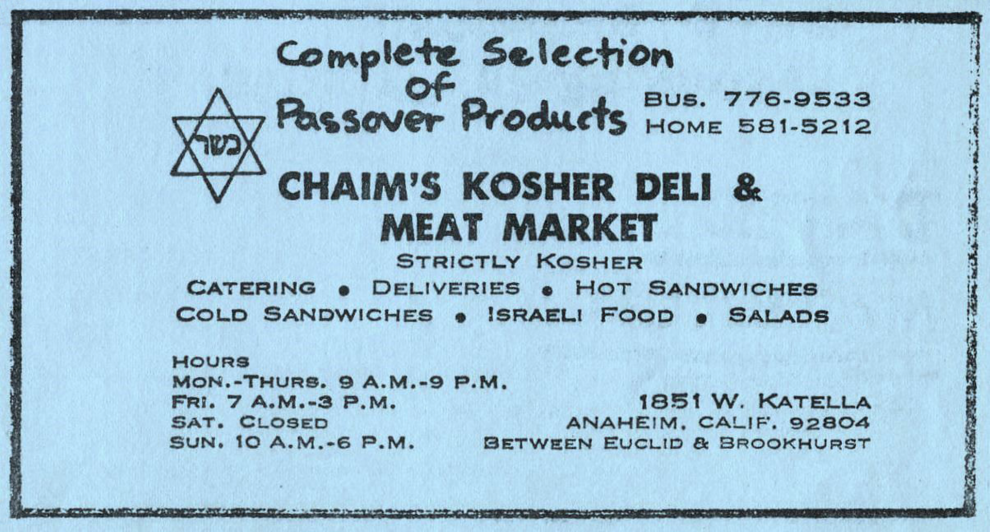 This local ad for Chaim's Kosher Deli & Meat Market of Anaheim appeared only twice, in the Laguna Beach JCC's Shalom newsletter in March and April of 1978. While the shop was short lived, it was one of a number of early attempts to provide observant Orange County Jews with kosher products. Long-standing stores were Sam's Kosher Meat Market in Garden Grove and Fairfax Kosher Meat Market in Los Alamitos. There were also several restaurants: The Better Life of Santa Ana, a strictly kosher sandwich provider in Anaheim in 1973, Ervino's French and Italian Cuisine in Santa Ana in 1986 and Renaissance Kosher Caterers at the Garden Grove JCC in 1989. However, with the influx of more observant Jews starting in the mid 1990s, Orange County now has kosher food available at many local supermarkets, as well as the continued success of Tustin-based OC Kosher (the largest source for kosher products in the county), Laguna Hills-based Kosher Bite and numerous caterers.