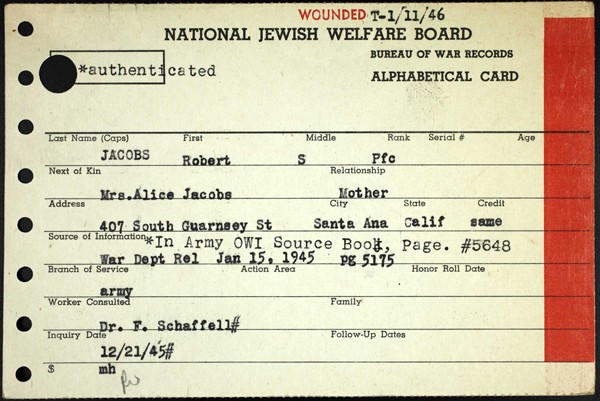 Born in Vermont in 1879, Fred Jacobs was the youngest of four children of Ellen and Alfred, a shoemaker who had immigrated from Canada. After his first marriage ended in divorce, Fred married a second time and he and his wife Alice had a son, Robert, in 1924. First settling in Los Angeles, the family moved to Santa Ana in 1931, where Fred had purchased a pharmacy at the corner of Main and First. Aptly called Jacobs Pharmacy, the business ran a series of ads through the years proclaiming that the pharmacy had “A Complete Line of Candles of Every Description.” Robert registered for the army in 1943, as soon as he turned 18, and was wounded in battle in January of 1945. It’s interesting to note that the worker consulted regarding young Robert’s medical record was Dr. Frank Schaffell, one of the founders of Temple Beth Sholom, the first synagogue in Orange County.